The PMI Athens, Greece Chapter celebrated the International Project Management Day on 6th of Nov. 2008. More than 150 people participated in this event that took place in the auditorium of JP-AVAX, the biggest Greek Construction company.

Welcome speeches at the event were delivered by:

After the networking break, Mr. Theofanis Giotis MSc, PMP®, Ph.D. Cand. (President of PMI Greece Chapter), presented the topic: «Leading Through Conflict Management!». The presentation focused on conflict in project teams and how it must be managed effectively for successful project delivery noting the conflict is one of the most difficult soft skills that someone can master and develop, but it is considered as a core leadership competence. 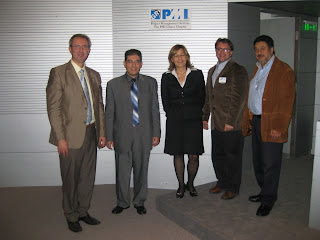 Photo (from left to right):

In 2003, Mr. Brannon earned the prestigious PMP® certification from PMI. He earned a BSc degree in Business Systems from the University of North Carolina, possess’ an MBA with a technology emphasis, and is a Certified Scrum Master.

Mr. Theofanis Giotis is Co-Founder and CEO of ITEC and Co-Founder and President of PMI Greece Chapter. Theofanis has over 20 years of professional experience in Project, Information Technology and Management and has worked in different cultural environments mainly in EMEA region.

Theofanis holds a BA in Economics (University of Athens), and a MSc in Management (O.R.) (Lancaster University, UK). Also Theofanis holds a Computer Programming/Systems Analysis degree from ACE College, Athens. Since 1993 he has passed more than 80 professional certifications, he was certified as PMP® in 2004 and he has graduated from PMI® Leadership Institute Masters Class (LIMC) in 2007.

The PMI Athens, Greece Chapter was founded in 2004, is a non-for profit professional association and it is operating as the Greek PMI Chapter of Project Management Institute. PMI Greece has 390 members from 230 companies that represent all financial sectors in Greece (information technology, telecommunications, construction, banking, public sector etc.)